It was time, Germer was gearing up to move offices (boy was that fun). I was in the process of finishing the spreadsheet project I started a month before when I was tasked with something new.  I happened to talk about my knowledge of technology during the interview process and my interviewers remembered.

Since we were moving offices everything in the old office had to be either recycled or placed into an inventory system to be moved to the new office. This included all of the computers. 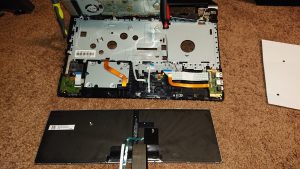 I walked into the office one day to a stack of computes and monitors surrounding my desk. They knew I have knowledge and experience working with technology, so it was my job to create this inventory.

The inventory system served multiple purposes; first and foremost was to account for the computers that we knew we had and ones that seemed to show up out of nowhere. The other purpose was to rank them based on their manufacture date and various states of dysfunction. This was essential since many of the systems had their own various unique problems, of which I was granted permission to solve.

The desktop systems were all operational but three of them had a low amount of memory by modern standards which I solved by doubling their capacity; no more slowdown when more than 2 programs or tabs are open. We also had to recycle multiple monitors since some of them spanned over the past decade and were not adequate for multitasking.

The laptops, however, were in a bit worse shape. One of them was still running windows 7 and had a keyboard problem, one had a completely dead battery, and another was completely dead. The first two we decided to not change other than replacing the battery on one. The last computer was destined for recycling, it was not coming back to life, so I made sure the hard drive was removed for security and added its memory to laptops that could use it.

Then it got interesting, one of my co-workers who shall not be named broke the “G” key off their laptop. This had to be fixed because we work at Germer International, and it was difficult to function with the key missing. I volunteered to replace the keyboard since it saved the company from having to send it to a third party. This particular laptop had to be disassembled COMPLETELY in order to replace the keyboard, it was quite the project.

So, please don’t break a key off your keyboard, especially if it is the first letter of the company name.

But DO make use of your various talents in the workplace and make sure your employer knows of them too.